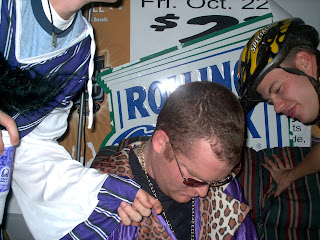 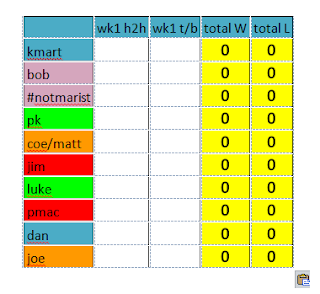 Just in case you missed it yesterday ...
Decision to Fire Del Negro "Already Been Made"

I cannot believe it took this long ...

The decision to fire head coach Vinny Del Negro has already been made, according to sources with knowledge of the Chicago Bulls' thinking. The fact that the Bulls' front office has not been able to settle on a replacement is the main thing keeping the embattled Del Negro employed, the sources said.

There were discussions recently within the organization about having John Paxson, Chicago's executive vice president of basketball operations, take over the team, but Paxson ultimately decided against it. Then, according to sources, Chicago contacted former Bulls coach Doug Collins, a candidate for the job two years ago when Del Negro was hired, but Collins was not interested in coaching the club.

WHO SHOULD REPLACE VINNY DEL NEGRO?
VOTE IN THE POLL ---->

Tyrus Thomas' return from a broken arm will get most of the attention, but the addition of Kirk Hinrich to the starting lineup for Saturday's 96-85 win over New Orleans was another important factor.

The most noticeable statistic was the Bulls posting a season-high of 28 assists - 4 better than their previous best, set against Golden State on Dec. 11.

Hinrich finished with 14 points, 7 assists and even knocked down 3 of 5 attempts from 3-point range. Derrick Rose contributed 9 assists and also scored 14 points.

"Kirk made sure everybody was on the same page, in the right coverages," center Joakim Noah said. "It was good to have him out there. It was like having two point guards."

Del Negro's right in this sit-uation

For nearly two months, Bulls coach Vinny Del Negro was remarkably patient with his underperforming veterans, but he finally got tough Tuesday night -- yanking John Salmons and Brad Miller from the starting lineup at the beginning of the second half of the Bulls' 88-81 loss to the New York Knicks.

Now, I'm not saying that all of the Bulls' woes are because of Salmons and Miller. All I'm saying is that everybody on a team -- including veterans with a proven track record -- must be held accountable for their actions.

''I just thought Taj [Gibson] came in with some good energy, like he always does, and Kirk [Hinrich] always comes in with some thrust, and I felt like we needed to kind of jump-start it a little. We did that in the third quarter.''

Whether it was the lineup changes or something else, the Bulls were much better in the second half against the Knicks and nearly rallied from a 22-point deficit.

Tyrus is Back, but For How Long?

After missing several weeks with a broken arm, Chicago Bulls forward Tyrus Thomas returned to the lineup Saturday night and played a spectacular game. Not only did he lead the team with 21 points, but he also chipped in 9 rebounds and 2 blocks, while shooting 59% from the floor. His athleticism has been sorely missed on a Bulls team that has struggled mightily in the seven weeks since Thomas first left the team, raising questions about how this season might have gone differently so far had Thomas not only been in the lineup the last couple months but playing this well.

That's all idle consideration, though. The fact of the matter is that he hasn't been playing, and Thomas's contract situation makes him one of the most interesting side stories for the Bulls from here on out.

We all know that Chicago will have a reasonable amount of cap space to work with this summer, but in order to spend that money on a marquee free agent the team would have to renounce its claim on Thomas, who's up for an extension this summer. In other words, they can't have a Dwyane Wade or Chris Bosh or Joe Johnson and also keep Tyrus Thomas. It's going to have to be one or the other.


Will Bulls try to remove all doubt from next year's cap space?

Watching the Bulls dish out a season-high 28 assists with Kirk Hinrich starting at the two-guard for the first time this season, I couldn’t help but wonder if the Bulls will try to go all-in on free-agency by trading John Salmons.

Salmons hasn’t played as well as the Bulls hoped and scored just 3 points off the bench in Saturday’s win over New Orleans. That’s not even the biggest issue, though. Salmons has an option to terminate the final year of his contract, worth $6.7 million, next summer.

There’s a good chance he will, since a decent number of teams will have cap room and even if he signs for a smaller yearly salary, he might be able to guarantee himself a greater guaranteed income over the next few years.

If Salmons doesn’t opt out, it would put a huge dent in the Bulls’ cap space. Without Salmons’ contract, the Bulls have around $33.1 million in commitments, which should give them more than $20 million to spend on free agents.

With that in mind, would they try to remove the doubt and deal Salmons for an expiring contract? That all depends on how much another team would value Salmons. The 6-7 swingman has been a good defender this year, even while his shot isn’t falling.

Just in case you missed my last post (and cannot scroll down on your own), here it is: Why the Bulls Must Trade Luol Deng: To Keep Joakim Noah and win a Championship

This post is meant to be a continuation of a previous post: 2010 NBA Free Agency = Fantasy Auction Draft (& a Bulls' FAIL!). The basic premise was that the Bulls (and most teams) will miss out on the big prizes next summer (Wade, Bosh, LeBaby) and end up overpaying a "second-tier" player (Joe Johnson, Amare, Rudy Gay).

Having one of the latter three would not necessarily be a bad thing (as I put second-tir in quotes to emphasize that all 3 of those guys are really great players, and not second-tier at all), all three would make the Bulls a much better team next season ... BUT would wind up hurting the Bulls in the long-term. This post will (hopefully) explain why, and (see title of post) why that will eventually force the Bulls to trade Luol Deng to keep Joakim Noah. So with that as background, here we go!


First, we have to look at the general composition of an NBA team in terms of salary structure. The salary cap and player contracts make all of this very complex but for my purposes, I will dumb it down. Basically, each team can afford to have two maximum contracts and one other very-near-max contract (or some similar combination), then fill in the remainder with smaller contracts (read: role players). To illustrate my point, let's use the NBA Champs from last year - the LA Lakers: