What to do with Joakim Noah?

Joakim Noah has really turned some heads this season. He's now seen as a possible all-star center. Personally, I don't think Noah ever has a legit shot of making the all-star team while Dwight Howard and Brook Lopez are in the conference, but his name is popular as a dark horse to throw into the conversation.

I remember trying to convince friends last season that Noah would become a top 10 center in the league, which I feel he has, when they tried to tell me the guy was worthless. Now everyone loves Noah. Maybe everyone loves Noah a bit too much.

I don't think the Bulls will trade Joakim Noah at the deadline now. However, I think they should listen to offers for one simple reason. It's easy to love Noah on a contract a bit over two million a year while he's playing well. However, his trade value will never be higher. See a funny thing happens in 6 to 18 months. We need to extend his contract. In discussions of his worth, I've already seen 10 million a year thrown around as his value.

That doesn't mean the Bulls should trade him, but it means you have to look at it rationally. We've seen a lot of good players in this sub-all-star level go through this team, get extended to big contracts they didn't live up to or leave for relatively little [often on big contracts they didn't live up to]. I love Noah, but see Nocioni, Gordon, Hinrich, Deng, Curry, Crawford, Chandler, etc..

I might be one of those people that over-value Noah, because I think he will command (and deserves) a decently-large contract. (Obviously I would be happy to extend him early, before a "market" is set, so that we can get some type of hometown discount.)

The Bulls should end a 12-year drought when second-year guard Derrick Rose is chosen as a reserve for the Eastern Conference all-star team sometime next week.

Will that actually happen? Hard to say. Rose clearly deserves a spot, but a couple of factors could work against him.

One problem is the fans vote for the starting lineup, and through the fourth set of returns, Philadelphia guard Allen Iverson was in second place with a sizable lead over Orlando's Vince Carter.

The starters will be officially announced Thursday at 7 p.m. on TNT's pregame show.

There should be no quarrel with the other likely East starters - LeBron James, Dwyane Wade, Dwight Howard and Kevin Garnett.


Are the Bulls Doomed To Be Mediocre for the Forseeable Future?

Before yesterday's afternoon matchup with the Warriors, the Bulls had been playing well. They had won their last four games and seven of their last 10 entering a highly winnable game against Golden State.

That was before they laid an egg against a severely under-manned Warriors team. Despite the fact that they only had four healthy NBA-caliber players, the Warriors still dominated the fourth quarter and defeated the Bulls by 17 points.

The loss left the Bulls at a middling 18-21 and dropped them to a meager 4-14 on the road. They still hold a two-game lead over the Knicks for the eighth playoff spot, but the general lack of depth in the Eastern Conference is a far bigger reason for that than the play of the Bulls.

After a shockingly poor effort, one has to wonder if the Bulls are making any progress. Ever since their surprising 2006-07 campaign where they reached the second round of the playoffs, the Bulls have been treading water on the fringe of the playoffs.

The shooting quandaries of the Chicago Bulls 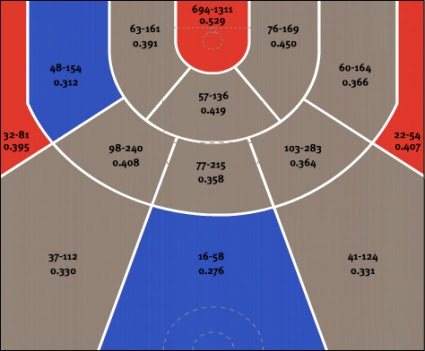 As the Bulls prepare for their game against the Los Angeles Clippers — the second stop on their current seven-game Western Conference road trip — Vinny Del Negro has some very real concerns to deal with. Forget the fact that his team could be without John Salmons, who spent Monday night in an Oakland hospital with flu-like symptoms, or that Kirk Hinrich’s status is unknown due to his own bout with flu-like symptoms, or even that he has to figure out a way to deal with L.A.’s Chris Kaman, who has very quietly become a real force inside (20.4 PPG, 9.3 RPG, 1.4 BPG).

Vinny’s biggest problem is that the Golden State Warriors provided a perfect blueprint for beating the Bulls, which is allowing and even enticing them into relying on their favorite field goal attemp. I’m talking about the long-range two-point jump shot.

So, with Francisco Garcia coming back to the Kings’ lineup soon and Omri Casspi finding his way into the Rookie of the Year discussion– and, to a lesser extent, SG Kevin Martin already being back since Friday — the Kings finally find themselves with a plethora of wings. They’ve been rumored to be wanting a big man.

So Sam Amick of the Sacramento Bee connects some dots here as trade season really starts to heat up: Nocioni (the odd man out at small forward) for Tyrus Thomas.