Playoff predictions Review (Round 2) and Links

Here's my original Playoff Preview, and [Updates and new thoughts are in bold and brackets]

WEST - ROUND 2:
LAKERS v ROCKETS
Again, Battier and Artest can bother Kobe ... but the Lakers are DEEP. Pau has been great this year. Bynum is great on D. Lamar is great coming off the bench (and getting minutes with the first unit). Plus, remember what happened last time Artest tried to get in Kobe's head? Lakers in 5. [Actual: Lakers over Rockets in 7. Rockets without Yao and T-Mac look pretty good, plus it seems like a good idea to go small against the Lakers - who would have thought?! This was tougher than I thought, but Kobe and the Lakers got it done.]


NUGGETS v MAVS
At this point, I cannot imagine why I picked the Mavs to be the Nuggets. For all the talk about how good the West is, this is the 2nd round match-up?? Nuggets in 6. [Actual: Nuggets over Mavs in 5. Everything is coming together for the Nuggets at the right time: they have a deep/talented front-line, great bench (Birdman for energy, JR for scoring), a big homecourt advantage, a good veteran PG, and a crunch-time scorer.]

BULLS v MAGIC
The dream ends here. We need Hedo and Shard to stay hurt, and need to get D-Howard in foul trouble. If we steal an early game, we can make it a series ... but let's be happy with a first-round win over the defending Champs. Magic in 6. [Actual: Magic over Celtics in 7. I was wrong with the Bulls beating the Celtics, but got this winner right anyway. Magic looked good in Game7, I don't think it matters tho, no one is beating the LeBrons.]

WESTERN CONFERENCE FINALS:
LAKERS v NUGGETS
Do I really have the Nuggets this far? Gross. Lakers in 4.

Where To Go From Here

The immediate issue for Chicago is figuring out what to do with Ben Gordon. Considering he's led the team in scoring for the last four seasons and is very much capable of hitting big-time shots, there are plenty of reasons to keep him around. But with the emergence of John Salmons as a legitimate replacement for Gordon (remember that Deng will start at three when he's healthy next year), it might be wiser for the Bulls to let BG walk and save their money for the Free Agency Class of 2010.

Because eventually, let's face it, the Bulls need to land a dominant big guy if they ever hope to be competitive. When Chicago gets hot, they can hit jumpshots all night, but when those shots stop falling they lose the ability to do any work from the post. What's the better investment, Gordon or the possibility of Chris Bosh, Amar'e Stoudemire, or maybe even Yao Ming? The Bulls certainly feel loyal to BG, but when one considers the business end of this argument, taking on $10 million a year for a one-dimensional streaky shooter might not be the smartest move.

Next season is going to be about developing Rose and Noah and figuring out which pieces on the team are going to work well with those two. It also will hopefully be about remaining fiscally responsible so they can be a player in the following summer's free agency. Despite all the odds, Chicago is still in a great spot to be a player for big free agents or a big trade. If they don't screw it up, they'll be in the Eastern Conference Finals within three years.

Reaction to the JoaNoah pics from a few days ago -

What'd you expect Joakim Noah to be doing after the Bulls were eliminated? Watching the Celtics-Magic series?

TMZ.com has gotten some photos from the paparazzi (who knew Noah had risen to the level of paparazzi?) that show the young Bull romping on the beach in St. Bart's with a young lady, reported to be his girlfriend.

The images leave little to the imagination -- at least of his lady friend -- but hey, Noah had a good playoffs and has earned some rest and relaxation.

Anything else going on in the photos? We'll leave that for you to decide. 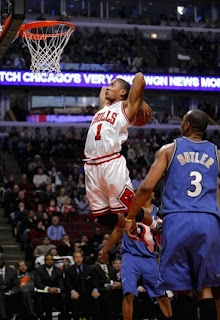 Do you think the Bulls will re-sign Ben Gordon? --John Martin, Edwardsville, Ill.

I’m to sports predictions what Milli Vanilli is to music--a fraud. I get most everything I predict wrong. So take this for what it’s worth, but I say no. I think too much has to happen--Gordon has to want to come back, the Bulls either have to make another move or enter luxury-tax territory--and I think there is some lingering animosity from not being able to strike a deal the last two summers. If Ben leaves, beyond what the Bulls will miss on the basketball court, the media who cover the team regularly will miss one of the most professional, stand-up players we’ve covered. He’s a go-to guy in the locker room.

Should the Bulls re-sign BG? Let us know in the comments here.
Posted by 2j at 9:42 PM

A shut-down 6'8" forward that protects the ball and can at the very least contain a team's best player? Outside of perhaps LeBron he's the closest thing to Pippen on the defensive end in today's NBA. He can defend any position be it 1-4.

The Rockets had no business being in that series without Yao, and yet still gutted out a 7 game series.

If we had a player that could give Wade, Pierce, and most importantly LeBron problems on the defensive end of the court couldn't we take one more step towards being a legitimate Eastern Conference Contender?

If our ultimate goal is to win another NBA title shouldn't that plan include (or attempt to include) some sort of antidote for LeBron James?