So last night I went out to dinner with resident BBS reader Duckfart and his family for his 25th birthday. HAPPY BIRTHDAY BIG GUY!!!! We went to Ditka's and the meal was phenomenal. Not 20 minutes passed and in walks John Vincent, local Frank Sinatra impersonator, and regular performer at Ditka's. This is BBS relative because as you might recognize, Vincent sings the national anthems at quite a few Bull's and Sox games. (Including the most important Bulls game in a decade, Game 6 of last year's epic Bulls/C's series)

However, the BBS relevantness didn't stop there. I looked over at the booth next to us, and asked Duckfart if the kid looked familiar. After he turned over we clearly identified him as fellow southsider, Blue Island native, Brother Rice baller, and UNC National Champion, Bobby Frasor.

We thought this was pretty cool and I debated saying something to him on the way out. Until I passed him and saw this man sitting across from him having dinner.

Some of you might recognize this man as one of the greatest people to ever walk the earth. Recognizable only by face and firmly implanted in Bull's lore. This is the man who accepted the 1.7% miracle, Bull's executive vice president of business operations, Steve Schanwald.

Now the next obvious question would be, why are the Bulls taking Bobby Frasor out to dinner? The roster is likely set at 13 with Aaron Gray at the last spot. So are they recruiting Frasor for their D-League team? Are Schanwald and Frasor related? What's the story here? Whatever it is, BBS will continue to follow this story (probably not).

Lastly, the sports randomness continued when we passed legendary CBS sportscaster Greg Gumbel on the walk home. All in all a very random Tuesday night in Chicago. 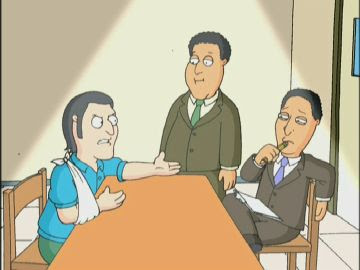