Bulls legend Michael Jordan, basketball’s greatest player ever, is among a class of five named for enshrinement in the Naismith Memorial Basketball Hall of Fame. The Class of 2009 will be inducted during festivities in Springfield, MA September 10-12, 2009. Coverage

Chicago, IL (August 31, 2009) – Comcast SportsNet, the television home of the Chicago Bulls, Blackhawks, Cubs and White Sox, will provide viewers with a two-day celebration of Michael Jordan’s induction into the Naismith Memorial Basketball Hall of Fame with complete game telecasts of five of his greatest games in a Bulls uniform, along with a pair of original, half-hour Comcast SportsNet specials chronicling his unsurpassed basketball career. This comprehensive, two-day programming event entitled 23 Hours of MJ: A Hall of Fame Celebration begins Thursday, September 10 at 5:30 PM with a Jordan-focused edition of Chicago Tribune Live hosted by David Kaplan and concludes on Friday, September 11, also with Chicago Tribune Live at 5:30 PM, featuring SportsNite’s Mark Schanowski reporting live from the Hall of Fame induction ceremonies in Springfield, MA.


Also liked these links from bulls.com ...

Paxson also pointed out that Jordan has never been given enough credit for how intelligent of a basketball player he was, constantly aware of game and clock situations. His leadership was highly evident even when play was stopped, as he was always the most vocal player during timeouts. In addition, the communication that existed between Jordan and Pippen on the floor allowed them to talk through a lot of game situations.

Not only was it Jordan’s ability and talent that made him the best of the best, it was his desire to put it all on the line when it mattered most.

“He always wanted to take the big shot and he was never afraid of failing,” said Paxson. “If you could get into the minds of a lot of players in this league, whether they are playing now or used to play, to take on the pressure of making the big plays that count with that amount of consistency just didn’t happen very often. He just accepted it.”

Jackson, for the most part, stays away from the Kobe versus Michael debate. But the coach with an NBA-record ten championships was clear about his opinion on Jordan’s contributions.

“I don’t think anybody will ever really touch what Michael has done for the game,” he said when asked if Kobe or LeBron James could ever vie for Jordan’s “best-ever” title. “They may be able to break a record he had or maybe win more championships. Michael was 28 when he won his first championship, and LeBron could win one before he reaches that age and have a chance at winning more than six. But Michael’s image as a player will always stand and his greatness will never be superseded.”

For Jackson, Jordan’s defining moment came during the team’s first championship run in 1991. After losing the series opener in Chicago, the Bulls won four straight games to defeat the Los Angeles Lakers, 4-1, in the Finals. During the fifth and deciding game, the Bulls faced a resilient Lakers team on their homecourt.

“We got stalled,” he recalled. “The Lakers were damn sure that Michael wasn’t going to beat them and stacked their defense against him. When I called a timeout, we talked a little bit about it on the bench. I asked him to tell me who was open because of how they were crowding him. He said Paxson. He knew it. I said, ‘OK,’ and that’s all I had to say.”

Jordan promptly fed Paxson for several jump shots, who connected on four-of-five down the stretch and finished with 20 points in 33 minutes.

“There probably have been players with similar skills to his, although I doubt there has ever been a player as good offensively and defensively as Michael,” Reinsdorf said from his U.S. Cellular Field office. “The thing that separated him from all the other athletes I’ve ever seen was his desire to win.”

When is the last time you bought a Beckett magazine? As a matter of fact, do you even know what Beckett is? If you collected sports cards growing up and wanted to stay up to date with the value of your cards, Beckett was the go-to book.

A number of magazines are paying homage to Michael Jordan’s induction into the Hall of Fame by placing MJ on the cover of their September ‘09 issue. The image above gives you a peak at the Air Jordan section that was done by SoleCollector. SC put together a feature which they priced out every colorway of each original Air Jordan, based on market value, rarity, nostalgia and completed auction prices.

As we all know, Michael Jordan will officially be inducted into the NBA Hall of Fame on September 11th, 2009. Recently, we have seen everything from magazine covers, sneaker packs, look books and other things that are associated with the induction. In the same manner, we have now spotted a one-of-a-kind collectible Michael Jordan Hall of Fame Gatorade bottle on eBay.

Similar to the Michael Jordan Gatorade Cooler Set that surfaced in July, this bottle features MJ’s signature along with a photo of him. This time, the photo is of Jordan shooting the ‘Last Shot’ against the Utah Jazz in the 1998 NBA Finals (Byron Russell is nowhere to be found in the picture). There is still two days left on this collectible, so head on over to eBay to bid now

That has to be what all of them are thinking. David Robinson. John Stockton. Cynthia Cooper. Don Nelson. The Basketball Hall of Fame's Class of 2009 will be announced Monday, and all the other candidates must be thinking: "Why do I have to share what should be the greatest day in my career with him?" None of them will ever say it out loud, but they'd be something other than human if they weren't feeling that way.

That "him" is special, though. In fact, he's more than special; he's beyond that. What that "him" has done is something no one else has done, before or since. He eclipsed damn near everything that everyone else has accomplished in the game. That old saying, "No one remembers who comes in second"? Well, no one remembers anything anyone else did if he or she played or coached during the Era of Jordan.

It's like, "Damn, can we please catch a break?"

Which is why the Hall of Fame -- if it really cares about players and being true to transcendence of the game -- should induct Jordan alone.

Solo. By himself. With no one else.


Last week I posted -13- "The Michael Jordan Collection, Part 1" ... The 'limited-edition-collectibles and cards' side of my collection will be dropping next Tuesday in "Part 2".

The first time I saw him, the summer before his freshman year, we were playing pickup games on campus. We all knew about him, but I'm from New York, and he looked like a scrawny country bumpkin from North Carolina.
-- Sam Perkins, Jordan's UNC teammate

When people ask me if I knew Michael would become a Hall of Fame player when I recruited him to play at North Carolina, I laugh and say, "Who did?" He was an exceptionally quick athlete who improved every year ... Of course, he made the game-winner against Georgetown as a freshman to help us win the national championship, but he didn't become a confident shooter until years later after he worked so hard on that part of his game. To be sure, one of the things that made him such a great player is his competitive fire.
-- Dean Smith, UNC coach

Yesterday we reported on the Beckett Michael Jordan Hall of Fame tribute issue, and today we shed light on the SLAM magazine issue. SLAM presents Jordan (A Hall of Fame Tribute) hits newsstands next week, but is now available online. The issue is 100% Mike with exclusive interviews, rare photos, greatest dunks, the UNC years, taking over Chicago, Air Jordans 1-XX3, and more. You’ll definitely want to add this issue to your magazine collection.

Read more about the issue ...

In two weeks Michael Jeffrey Jordan will be inducted into the Basketball Hall of Fame as the G.O.A.T. It’s a fitting acknowledgment and the crowning achievement in the career of the best basketball player to ever play this game of ours.

SLAM has always acknowledged his dopeness, so as the NKOTB whMichael Jordano also happened to grow up in Chicago during the Jordan Era, I figured it would be cool to share a few fond memories I have of the man during his ascent to the title as one of the best to ever do it.

There are two types of Jordan fans; those who are from Chicago, and those who aren’t. Being a member of the former, it’s impossible to explain in words what it meant to grow up in this city during Jordan’s reign. His influence and his presence were everywhere. For me, it was more akin to a religious experience than anything having to do with basketball. The best way to describe it, or better yet, the closest thing to it would have to be when Jesus walked the Earth. After Jesus of Nazareth and before Jesus of Coney Island, there was Jesus of Madison Street.

Whether you're a native of Chicago, or simply one of the millions of basketball fans worldwide who got swept up in the mania that was Michael Jordan's Chicago Bulls, ESPN has a special edition magazine on newsstands now that you'll want to check out. In what is called a "Hall Of Fame Collector's Issue," ESPN has put together an entire book together to celebrate the life and career of the man they call "The Best Ever."

He has meticulously re-stitched the shoes into 23 (like the basketball legend’s number) ceremonial masks. Even Michael Jordan owns one of the masks.

(The above link only has that picture, couldn't find the full set - but there's a few more MJ masks -21- here.) 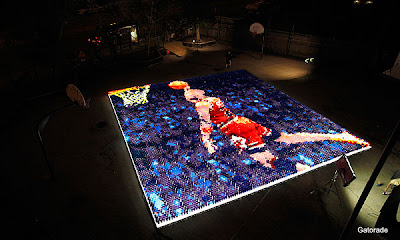