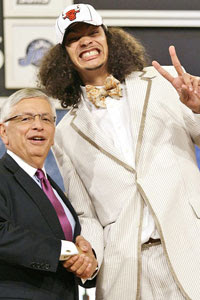 
Some of the hate for Joakim Noah has been previously mentioned on this board. Personally, I hated him in college, because of him I hated Florida, and I cheered against them every single round of March Madness for two straight years... to no avail.

A lot of my hatred for him stemed from his excentrics during games along with ridiculous-ness of post game celebrations especially after the second national championship: "We gonna do it right doggg...this is for all my doggs in the FLA... We gon' do it..." (followed by a lot of other ridiculous verbiage that didn't constitue English).

I saw the pick coming. While most experts predicted Spencer Hawes, Noah fit the mold for the Paxson draft pick. Big man, productive college player, stud in the NCAA Tourney.

I didn't hate the pick, because I thought he was probably the best player available at the time, but I obviously had my qualms... mostly for the above mentioned. After the draft though, I began seeing more interviews of him, and it turned out he was actually a pretty regualr, well-spoken kid. Not the Florida river-rat that I was led to believe.

I began to see that if he played and worked hard as a Bull, I could begin to enjoy some of the antics that I had hated while he was at Florida. I call this the A.J. factor. Sure he might be an asshole, you have no problem ackowledging he's an asshole, but as long as he's your asshole, you'll love him.

This is where I am now. I love Joakim Noah. I think with a serious off-season of hitting the weight room (instead of drinking henessy, smoking pot and eating cheetos with his "doggs") he could become a great player.

Two months ago, when trade rumors were swirling for Amare, I would have traded Noah long before Tyrus. Now... there's no way. There is no way I would ship out Joakim Noah before I would ship out Tyrus Thomas. He's becoming a legitimate center and has surpassed Tyrus in value. (And this is coming from one of the biggest TT fans you can think of!)

These are his words, his truths, because if there's one thing Noah loves to talk about, it's his varieties of swag.

Swag, of course, is Noah's shorthand for swagger, Noah-speak for cool. It could be anything from his seersucker suit on draft night to the way he sneers and belts out a scream after a big play on the court (or a not-so-big play), even if no one is really scared of his scream, because, in truth, he's not very scary at all.

Noah's swag was in full effect when he walked up to Jerry Reinsdorf at practice this past Saturday before the Bulls' series-tying 121-118 victory over the Celtics in Game 4 on Sunday. Noah put one of his oversized mitts on the chairman's back and said, "Whassup, Bossman?" After the casual greeting -- Reinsdorf seemed charmed by it -- Noah promised the Bulls' owner the team would make him proud the next day, which it did.

Noah had 12 points, 10 rebounds, three blocks and a ferocious dunk in the deciding second overtime Sunday. When things are going well -- when Noah is contributing by tipping the ball around, grabbing rebounds, blocking shots and tomahawking it home -- his swag is a sight to see.

But if you're not a fan of the Florida Gators or the Chicago Bulls or wispy mustaches, you might find the gangly, boisterous Noah and his so-called swag more annoying than Ronnie Woo Woo on Red Bull. You might hate him from his flopping ponytail down to his boat-size Le Coq Sportif high-tops. If you're a Boston Celtics fan, you're probably going to boo him mercilessly Tuesday night.

"Some people like me. Some people really hate me," he said. "It's been like that since I was a little kid. I don't really know what it is, if it's the hair or just the way I am. I just learned to live with it."

When I asked him for reasons fans shouldn't hate him, he said, "I think they should hate me. I really don't understand it, but at the same time, I cherish it. I like the role as the guy opposing fans like to get on."

The on-court Noah, the impossibly long-limbed, nimble 6-foot-11 center, has the potential to be a game-changer on defense. When he is on the offensive end, though, his vulnerabilities are laid bare. Aside from a few feet around the rim, he's perhaps the sixth option, after his four teammates on the court and maybe Bennie the Bull. But he's the one who gets heckled the most.

"All the time," he said. "It's unbelievable. … I'm from New York, so I remember going to the Garden and the people we would hassle would be Reggie Miller, Michael Jordan, the best players. Offensively, I'm just getting mine off tip-ins and keeping the ball active. For some reason, fans in other gyms love to hate me. I like it."

"Fans just seem to not like him," said Celtics center Glen "Big Baby" Davis, who battled Noah while in college at LSU.


Last season was Noah's first not making the postseason. Needless to say, the competitor in him is enjoying the playoff experience in 2009.

"This is what it's all about," he said. "Huge crowds, everyone on the floor really wants to win. Everything you do is meaningful. Every screen you set is big. Everything's magnified, and I love it."

Noah admits he "world toured" a bit too much last summer, traveling to Hawaii, Las Vegas, Miami, France and Sweden. Whenever this season ends, he plans to split his time between Chicago and Bradenton, Fla., where he is scheduled to train at the IMG Academy.

The French national team wants him to join the squad for the 2012 Olympic qualifying tournament. He isn't sure about that, though. He knows he needs to focus on adding more bulk because, as he's found out, swag takes you only so far.

"You got to take this seriously," he said.

I hope Noah's got his swag on tonight and takes a huge dump on Kendrick Perkins.
Posted by Kmart at 9:44 AM

I've been a Noah advocate for a while now, but seriously?! More than TT?! I don't know if I'd go that far (yet).

He is working down at IMG this summer, which should be HUGE for him! I don;t care what he does offensively (assuming he still gets his tips and rebounds). I just want to see him come in stronger and in better shape.

TT worked on his shot last off-season, and it's not there yet. Given another summer to get it right, he could be a different player offensively next season. Especially now that he's seen what a weapon Brad Miller (and his limited skills) can be in the pick-and-roll ... I see TT and Rose as a scary combo starting next year.

Let's talk about Noah v. TT when we see what both of them do over the summer.